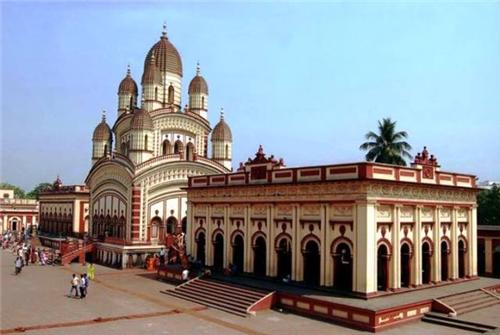 Dakshineswar Temple, famous among the Bengalis as Dokkhineshshor Kali Mondir, is devoted to goddess Kali and situated in Dakshineswar which is near Howrah. The temple is presided over by the deity of Bhavatarini who used to be Kali’s aspect and located on the bank of Hooghly River in the eastern region. The deity stands for a female who frees her devotees from the bonding of existence known as Samsara. Rani Rashmoni, a follower of Kali and a philanthropist, took the efforts to establish the temple in 1855. Ramkrishna was a spiritualist of Bengal in the 19th century and extremely famous for being deeply associated with this temple.

Rani Rashmoni from Janbazar, who was a member of the Kaivarta caste, established the temple in the nineteenth century. She was extremely famous for different kinds of humanitarian activities. In order to convey her attachment to the godly mother, she decided to go for a pilgrimage to a sacred place for the Hindus, Kashi in 1847. She was prepared for traveling in 24 boats for carrying her servants, supplies and relatives. There are stories which say that Rani Rashmoni had a dream about the goddess on the night before she began the pilgrimage.

The goddess appeared in the form of Kali and told to her that she need not go to Varanasi. Instead, all she needed to do was worship Kali after installing her statue in a temple constructed on the banks of river Ganga. The goddess promised to acknowledge worship in the temple after manifesting herself in the picture. The dream had deeply affected her and forced Rani to look for a land for constructing the temple. She bought a plot of 20 acres from John Hastie, an Englishmen. The land was previously known as Saheban Bagicha and located in Dakshineswar which was a small village at that time. The large complex of the temple was built in eight years from 1847 to 1855.

A portion of the land was used as burial ground by Muslims and had a shape similar to that of a tortoise and as per to traditions of Tantra, it was considered good for worshiping the Lord of Shakti. Almost nine lakh rupees at that time were spent for constructing the entire temple. On the day of Snana Yatra on 31st May, 1855, the goddess Kali’s idol was finally installed in the temple. It was done in the middle of the festival, Sir Sri Jagadishwari. 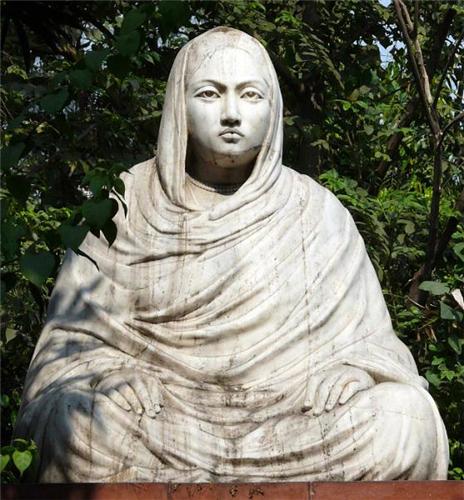 Ramkumar Chattopdhyay, the elder brother of Gadadhar or Gadai who was later famous as Ramakrishna, was the head of the priests. Hriday, his nephew and his brother assisted him in carrying out all the work then. Rani invited over one lakh Brahmins from different parts of the country on 31st May, 1855 to take part in the auspicious festival. Many Brahmins, however, charged Rashmoni with the blame that she didn’t have the power to offer food to the Brahmins and possess a temple as she was from a much lower cast.

In 1856, after the death of Ramkumar Chattopadhyay, the position of head priest was handed over to Ramakrishna and Sarada Devi, his wife. Sarada Devi stayed in a small sized room located on the southern portion of the music room known as Nahabat. In the present age, the room has a shrine which is dedicated to Sarada Devi. Ramakrishna served in the temple for thirty continuous years until he died in 1886. He took the responsibility of bringing fame as well as pilgrims to Dakshineswar temple during this period.

The owner of the temple, however, lived for approximately 6 years after the temple was inaugurated and died after she was unwell in 1861. After sensing that she was near to her death, she handed over her property located in Dinajput (presently located in Bangladesh) on 18th February, 1861, the day before she died. She did this in order to supply sufficient money for maintaining the temple for a long period of time.

The temple was constructed in the traditional nine spires or Navaratna style which belonged to Bengal architecture. It had three storeys which faced south and nine spires which were distributed in the top two storeys. It stands tall with a height of more than 30m or 100 feet and covers an area of 46 feet square. Goddess Kali’s idol, Bhavatarini is housed in the sanctum sanctorum, known locally as "garbha griha", standing on Shiva’s chest. A silver lotus consisting of thousand petals carries the 2 idols. 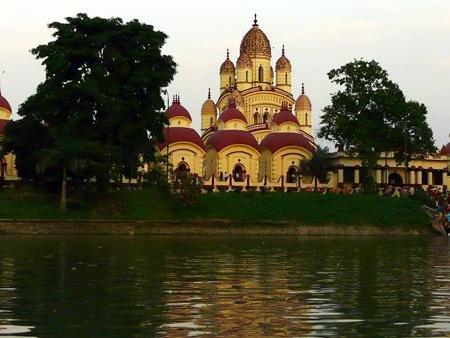 The Aat Chala, a characteristic style of Bengal architecture was used for constructing 12 similar temples of Shiva, all of them facing east. These temples are located near the original temple on both sides of Hoogly River’s ghat.  The Radha Kanta temple or the Vishnu temple is located in the north eastern region of the complex. You can reach a columned verandah after covering a number of steps and enter the temple which houses a huge silver throne having Lord Krishna’s idol (550 mm high) along with that of Radha’s (410 mm high) idol.


More About the Dakshineshwar Temple

Dakshiwneshwar temple is located along the Vivekanand Bridge in the norther portion of Howrah, at a distance of around 20 kilometers from Dalhousie. It is an elongated building established on a raised platform having a number of stairs. Besides the main temple consisting of nine spires, the compound consists of a big courtyard and has rooms attached to the walls of the boundary.

Twelve shrines located along the river have been dedicated to Lord Shiva, the companion of Kali. It has a ghat for bathing, a temple dedicated to Radha Krishna and a shrine dedicated to Rani Rashmoni. Ramakrishna used to spend a substantial amount of time in a chamber known as Nahavat Khana which is located in the north-western portion of the compound on the backside of the last Shiva temple.