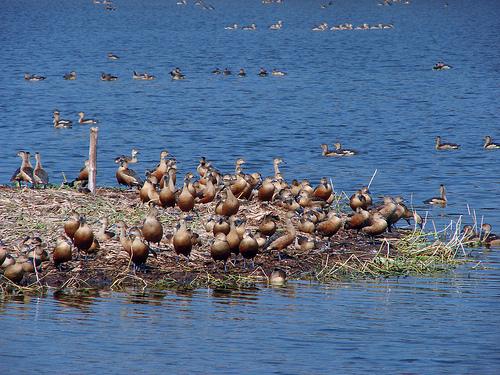 There are a number of water bodies in West Bengal which attract a large number of migratory birds during the winter season. Among them, the most significant lake is in Santragachi, in Howrah, just across the River Hooghly from Kolkata. A huge variety of migratory birds are seen here, especially during the winter months. This lake is regarded as a bird sanctuary. A large number of bird watchers and photographers visit here regularly to spot rare birds. This lake is locally known as the Santragachi Jheel, ‘Jheel’ means ‘a big lake’. In this 21st Century, most lakes and water bodies are being filled up for real estate purposes. 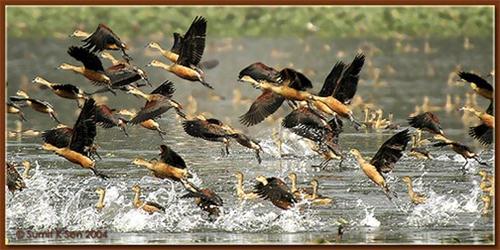 The environment around the lake is absolutely pristine and perfect for the birds from cooler climates. The fresh air around the lake is a very good place for morning walkers and other health conscious people. Other water bodies in the city are slowly getting polluted and hence the number of birds is increasing in this particular lake. 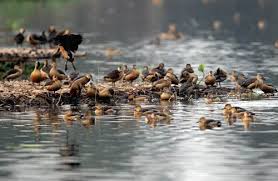 A large number of birds fly in from across the Himalayas and other cold countries every year. There are birds from distant places like North America and Australia as well.

Rare birds like the Gadwall, Northern Pintail, Northern Shoveler and Garganey fly in from the cold Siberian region as Siberia becomes unbearably cold during the winter season.

Saras Cranes migrate from North America. Some of the other bird species that fly in are Comb Duck, Ferruginous Pochard, Swinhoe’s Snipe and Fulvous Whistling Duck. The Swinhoe’s Snipe is a major attraction among the bird watchers and photographers. Among the famous bird species from Siberia, the Baikal Teal is found. This diversity of migratory birds of varied colours and characteristics is what makes this Santragachi Jheel a rare habitat for birds. 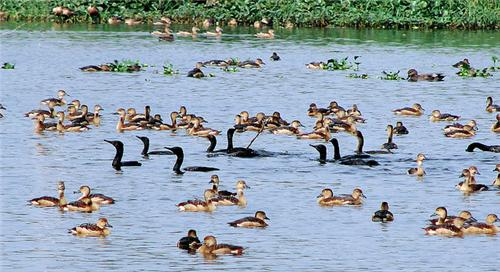 The most widely found bird species in this lake is the Lesser Whistling Duck which is a local bird and is present in the lake permanently. The local breeding birds inhabiting the lake are the Bitterns and the Jacanas.

The birds can breed and roost in this lake without any external disturbance.


Maintenance of the Santragachi Jheel

The lake is under the management of the South Eastern Railway and the Forest Department of West Bengal as is already mentioned earlier. The two managing bodies have maintained the lake for a number of years. They have done a very commendable job for a number of years. There has been a persistent problem of water hyacinths growing all over the lake. The railway staffs have been clearing the water hyacinths to make the lake suitable for the birds. 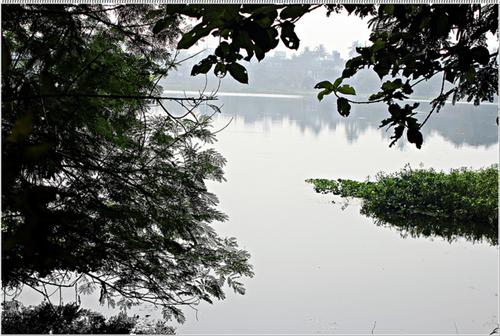 However, this year the authorities from either the South Eastern Railway or the Forest Department of West Bengal did not take any initiative to clean the lake. The water hyacinths overgrew all over the lake and it was totally unsuitable for the migratory as well as local birds. However, a group of concerned citizens from the locality brought this to the notice of some eminent environment activists like Mudar Patherya and others. They took the initiative and made arrangements for cleaning up the lake on time for the migratory birds to come.

At one point of time, there was serious doubt whether the Santragachi Jheel would have visiting birds any more. But due to the timely actions taken by a responsible group of citizens, a large number of migratory birds have visited the lake this year as well.

Santragachi Jheel is indeed a bird watcher’s paradise, especially during the winter season. The fact that it is so well maintained has added to that. The experts on birds have often said that it is very rare to find a bird sanctuary, full of a variety of bird species, right in the middle of human habitation at the heart of the city. The bird watchers flock the lake throughout the year to enjoy the scenic beauty of the lake and watch a huge variety of birds to their heart’s content. 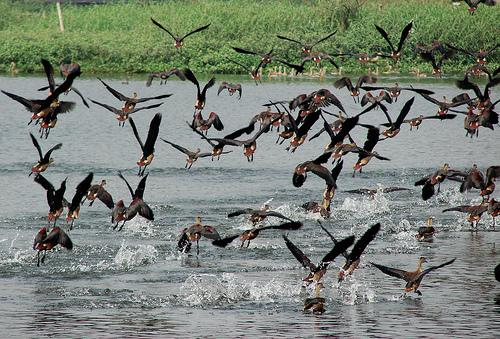 The bird watchers come armed with binoculars which help them in having a better view of the birds. There are a considerable number of photographers who visit the jheel regularly, especially during the winter season. The various bird species are very photogenic in nature and hence the lake is such a favourite among the photographers. The census carried out last year during the winter season showed bird species over 9800 species. This large number of species at one place is a rarity in this 21st Century.

The best time to pay a visit here would be the winter season, especially in the months of November to February. This is so because the number of the migratory birds increases during the winters. If you go at early morning (around 6.30 am) or during late afternoon (4 pm afterwards), your visit to the Jheel would prove worth it.

How to reach Santragachi Jheel from Howrah

Tourists can also take trains from the Howrah Railway station. You need to travel an approximate distance of 7 km from Howrah Railway Station to the Santragachi Jheel.

Santragachi Jheel has the potential to become one of the best bird sanctuaries in the country, provided it is maintained well.