Situated on the fertile western banks of the river Hugli, Howrah is the smallest district of West Bengal. Despite being the smallest, the district has shown immense potential in terms of overall growth and development and this has been possible only because of the constant development of the transport and communication infrastructure. A huge impetus was provided to the industrial development in the year 1854 with the establishment of the Howrah Railway Terminus. 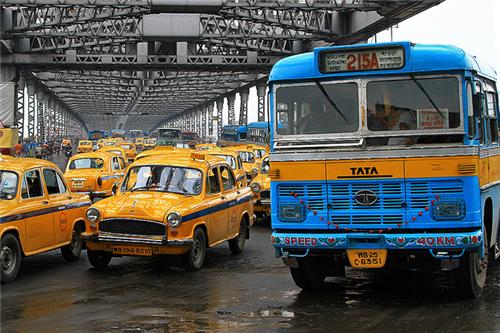 Since then, over the next 150 years, a massive development in the transport system of Howrah was observed when the National Linkage of Howrah was established with the rest of the country. The intra and inter regional transport and communication is now looked after by the roadway based services while the massive network of railways provides the commodity and passenger linkages at the national level. The extremely navigable Hugli is also connects the peripheral parts of the district. Thus, this extremely well connected transport system is one of the prime factors of the growth and development of Howrah.

Buses serve as the primary means of mass transport in Howrah in terms of short distance for the common people of Howrah. The use of buses for long distance communication is not much in vogue though, but it is sufficient to cater the minimum needs of the citizens. The bus services in Howrah can be classified into three categories depending upon their destinations and trip generation system. They are namely Within Howrah Bus Services, Howrah Kolkata Bus Services and Long Distance Bus Services. The Within Howrah Bus Services consists of Mini, Private and Executive buses connecting the interior parts of Howrah.

The private and mining buses ply on over 24 and 34 bus routes respectively with a fleet strength of 666 and 821 respectively maintaining urban linkages with Kolkata. There are also 73 other routes for private (31 routes) and executive buses (42 routes) present dedicated to intra regional communication, with a 346 and 185 fleet strength respectively. Due to their efficiency, the public demands of these services are constantly increasing over each year.

Howrah and Kolkata, situated on either sides of the river Hugli, constitute one of the busiest regions in eastern India. Connected by the three famous bridges namely Ravindra Setu, Vidyasagar Setu and Nivedita Setu, buses serve as the chief means of transport between the two cities. Thousands of people commute through these routes everyday for various purposes.

About 2600 buses ply on these bridges daily bound for about 148 distinct routes meant for 14 different buses. Demands of long distance buses is not so great as the other routes due to the effective functioning the Howrah Railway Terminus and other sub-urban railway stations, but in the interior parts, inter district bus services are available connecting Howrah with its neighboring districts. 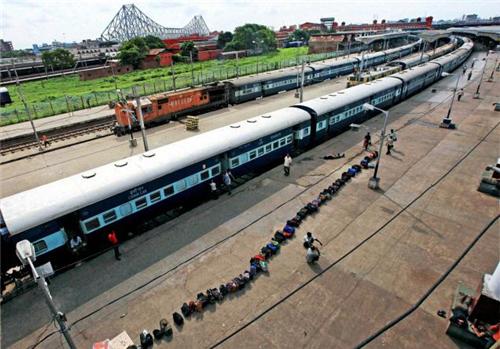 The Railway System is the most notable feature of the transport in Howrah as it boasts of the National Railway Terminus, popular as the Howrah Railway Station, which is the oldest and the largest of its kind in India. A confluence of two different railway zones namely the Eastern and South Eastern zones, the Howrah Railway Subdivision comprises of 13 urban stations and 30 rural stations.

Over 190,000 urban passengers and 173,000 rural passengers avail this form of transport to enhance their suburban communications. The trains ply on 6 different lines linking Howrah and Kolkata with different parts of the state as well as the country from this station. All the major trains such as the Rajdhani Express, Shatabdi Express etc. operate from this station connecting Kolkata with other major metropolitan cities. The Shalimar Railway Terminus also acts as an important junction of different railway routes.

Taxi, auto rickshaw, trekker and the ferry services constitute the local transport in Howrah. They remain subjected to very high public demand, especially in the innermost corners of the district where the availability and frequency of buses is alarmingly low. These forms of transportation are in vogue as they are less time consuming in terms of short distance and are comfortable too compared to the services provided by buses, but they are slightly more expensive than buses.

Trekker Services
The trekker services come next to buses as far as their popularity is concerned. There are about 23 trekker routes spanning all over Howrah with about 270 trekkers plying every day. They mainly look after the short distance rural communications where other conventional means of transport are not frequently available.

Auto-Rickshaw Services
The auto rickshaw services rule the short distance trips in the urban areas in the city core of Howrah. They save a lot of time for the passengers and the fares are well adjusted so that people belonging to any financial background can avail these services. 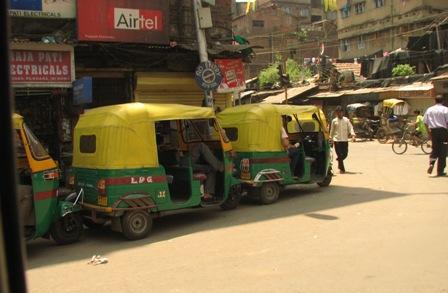 The auto-rickshaws operate on 18 major auto routes connecting the various parts of Howrah municipality with over 600 auto rickshaws carry thousands of passengers daily.

Taxi and Cab Services
This is also a very rapid means of transport in Howrah, linking its different parts with all the major railway stations and bus terminuses as well as with different regions of Kolkata city. The fares of this means of transport are very high compared to other means but the efficiency and comfort is unmatchable. About hundreds of taxis and private cabs are available at Howrah Railway Terminus for passengers both on the prepaid and meter basis.

Ferry Services
A very high dependency on waterways is evident from the constant ferry services plying across Hugli which remains navigable in every season. There are nine ferry ghats dedicated to connecting Howrah and Kolkata Municipal Corporations. 41 more ghats are present to connect other blocks of Howrah with adjacent districts of South 24 Parganas and East Midnapore. The waterways remain in demand for being fuel efficient, economic an eco-friendly.

Metro Services
To diminish the work load on the other prevalent means of transport, the West Bengal Government proposed the East-West Metro Railway project (200-2005) to enhance the communications between Kolkata and Howrah. The project is still under construction. It is hoped that after its completion, many transport related problems of Howrah will be solved.