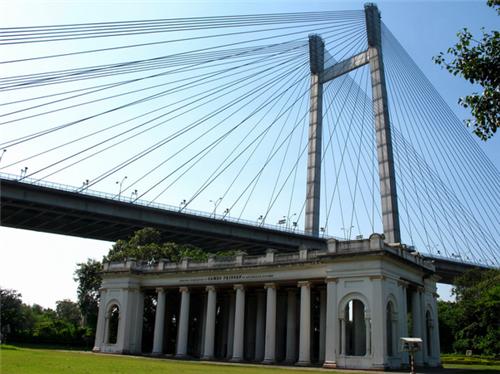 Vidyasagar Setu is one of the most important landmarks in Howrah. This bridge is also called the Second Hooghly Bridge, after the Howrah Bridge which was the first one to be built across the River Hooghly. The authorities charge a toll tax on the vehicles plying on the bridge. The bridge has the distinction of being the longest bridge in India among the cable-stayed ones. The bridge has a length of 823 meters.
The history of the bridge is brief yet significant. Indira Gandhi, former Prime Minister of India, had laid the foundation stone of the bridge in the year 1972. The construction of the bridge took around 22 years to be completed. The bridge was named after the great educationist and social reformer of Bengal, Pandit Ishwar Chandra Vidyasagar. The design of the Vidyasagar Setu was done by Schlaich Bergermann & Partner. It was re-examined by the Freeman Fox & Partners. 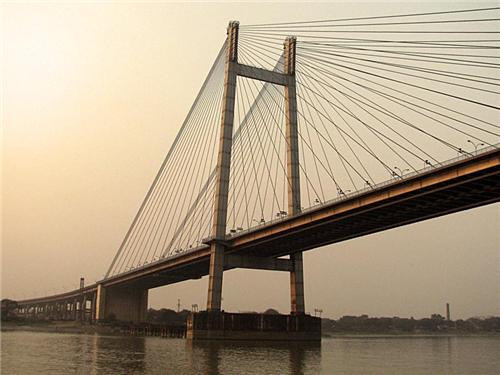 The construction work of this landmark bridge of the ‘City of Joy (Howrah)’ was done by Bharat Bhari Udyog Nigam Ltd. Braithwaite, Burn and Jessop. When the bridge was completed it had the longest span among the bridges in the world. The total cost of constructing the whole bridge was 3.88 billion Indian Rupees.
In the middle, there were 7 years when construction work had come to a stop.

The cable-stayed architecture of the bridge is very noteworthy. It looks very nice to look at from afar and is a favorite among the photographers. The composite concrete of the deck of the bridge is steel-reinforced. This makes the bridge extra secure. The specially designed deck crane was used for the erection of the bridge pylons. The total quantity of steel used in the construction of the whole structure is 13200 tonnes. The experts from the Indian Institute of Science, Bangalore, have conducted a lot of tests on the wind tunnel. 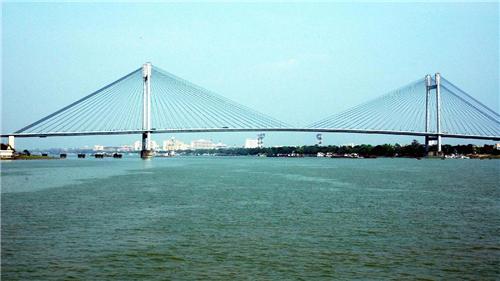 There are a couple of carriageways on the bridge for the up and down traffic. The bridge is very well maintained by the authorities and the traffic flow is quite smooth. Initially there were traffic congestion problems on the bridge which led to the construction of the two separate carriageways. This step has reduced the number of accidents taking place on the bridge as well. The lighting system on the bridge has been improved considerably over the years.

There have been steps taken by the authorities to beautify the bridge as well. Of late the Vidyasagar Setu looks very elegant looking from the Howrah Bridge as well as the other spots along the river. The view of the bridge is indeed very photogenic and enthralls the spectators with its glamor.

The second Hooghly bridge has eased a lot of pressure from the Howrah Bridge, taking away a lot of traffic from it. The people of either side of the river have been benefited a lot as traveling has become a lot easier because of this bridge.Vidyasagar Setu starts from Shibpur in Howrah and meets Prinsep Ghat in Kolkata.

The bridge is a testimony to the progress that India has made as far as architecture is concerned.

Explore more about About Howrah